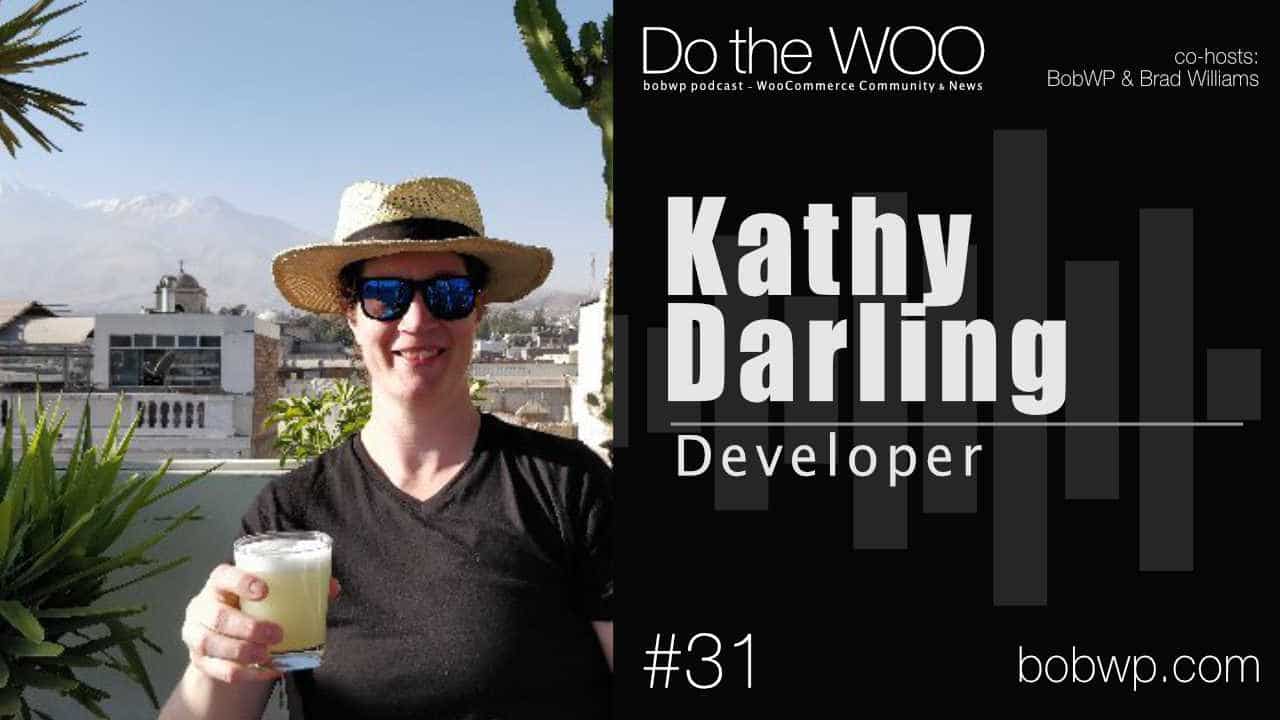 Do the Woo - WooCommerce Podcast, Community and News
WooCommerce Extensions, Gutenberg and Slack with Kathy Darling

When you spend a lot of time supporting people in the WooCommerce Slack channel and build your own extensions, you have your fingers on the pulse of the community. Kathy joins us to talk about her own Woo adventures.

In episode 31 of our podcast, we are chatting with Kathy Darling, a WooCommerce extension developer and a prominent supporter of the WooCommerce Slack channel.

We start the conversation with a dive into the extensions she has on the WooCommerce Marketplace.

Brad asks her more about the extension Name Your Price.

I’ve seen a lot more people using it in a nonprofit donations context. I’m seeing a lot more people using it than I ever planned for it. It was born out of one former client asking me, Hey, can you do this? Me not actually knowing how to do it, but saying sure, which isn’t always the right answer. It was somebody who wanted to sell his books and his writings. Whatever someone was able to pay, he wasn’t necessarily concerned with how much profit he was going to make off of it.

Kathy tells us more about creating and maintaining extensions. Also her experiences and thoughts around JavaScript, as well Gutenberg support for extensions and how the classic editor plays into this.

As a part time developer, it’s not always going to be possible to maintain two code bases.

We move into the behavior around offering the option for someone to pay what they want, with a minimum amount set.

This goes in several directions and Kathy again stresses that the real strength is focused on donations and fundraising.

I ask Kathy about her involvement in the WooCommerce Slack channel. I have seen her in there providing support to a lot of people.

I think I used it to procrastinate a lot. Yeah. It’s way easier for me to sell someone else’s problem than it is for me to solve some of the problems I’m working on.

I like helping other people and I have learned a lot of stuff from helping them. Even when I was just starting out with WordPress, one of the first things I did was try to help other people with the theme framework because that’s what I was into first. It taught me so much about how that framework worked. That’s what I see with how I work in the WooCommerce Slack. Helping other people introduces me to maybe some sections of eCommerce that I don’t really play with, with regards to my three plugins.

Extension on the WooCommerce Marketplace

My own experience with the marketplace on WooCommerce is that people trust it. So I asked Kathy why she chose it for her extensions. She dove into that a bit, sharing her initial reason.

As a developer, marketing is not what I really want to do with my time. I like solving problems with code.

We end by talking about the new WooCommerce hosting that GoDaddy released. Reasonably priced and with over 1K worth of extensions, we all agreed it was a great opportunity for the potential store owner to get their feet wet with WooCommerce.

We also chatted a bit about the upcoming Black Friday and how much each of us may put off buying certain stuff until the chance to get a discount comes around.

Where You Can Find Kathy

News We Talked About